Spotify has been working on its music video strategy behind the scenes for some time. It might finally be ready for prime time.

In June, Digital Music News reported on Spotify’s possible pivot to video. App engineer Jane Wong reported finding references to the video in a new version of the Spotify Android app released around this time. This test version of the app included a redesign to accommodate videos with three tabs. One for standard album art, one for the new video player, and one for Spotify Canvas.

In this regard, Spotify lags behind when it comes to providing music videos in the app.

Spotify has invested heavily in podcasts and spoken word shows, but video is also part of that strategy. The Joe Rogan Experience is the first video podcast to launch on the service, and more are sure to follow. While Spotify hasn’t said anything official about upcoming music videos, their documentation says otherwise.

A new help document for the app tells users how to use the Spotify app to watch music videos. “Watch exclusive music videos, documentaries and video series, all from the Spotify app,” the header reads. It contains instructions on where to access videos on iOS and Android. 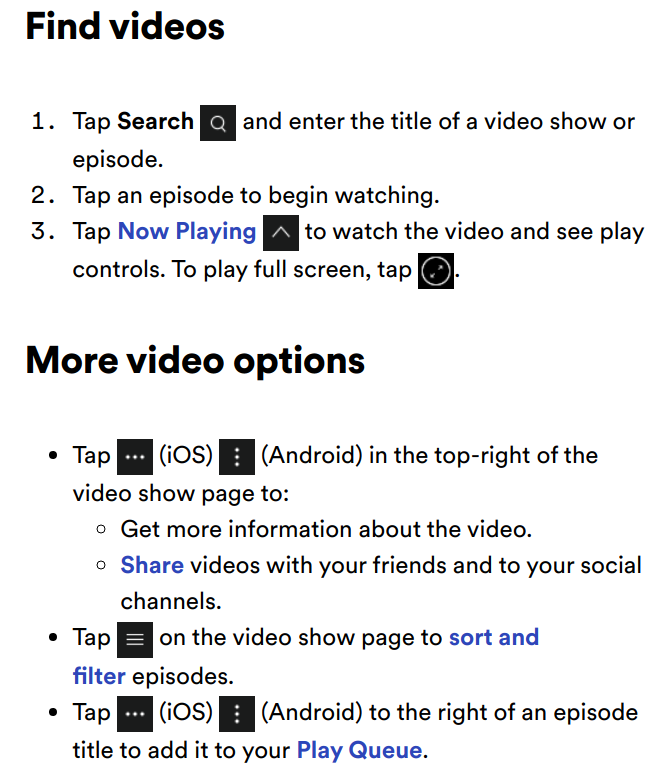 The instructions are slightly preemptive, as you can’t actually follow the steps. Aside from the new July video podcast news, Spotify hasn’t announced any music videos. Other exclusive content that could arrive includes “exclusive documentaries and video series” from a now-deleted Spotify community moderator comment.

This suggests that Spotify may be looking to become the No. 1 in streaming audio, but music videos as well.

We’ve seen the effect exclusive content can have on music streaming platforms in the past. But adding podcasts and music videos to that mix changes the equation. Suddenly music streaming services have more to offer than just the latest releases. It’s also worth noting that the help docs state that Spotify music videos are for premium users only.

The 10 best clips of Lady Gaga classified by outfits worn

Lady Gaga turns 35 on March 28 and no one looks like her. As audiences scour the internet for new photos from the set of her upcoming film ‘House of Gucci’, Gaga – née Stefani Germanotta – remains an unstoppable force. She continues to reap awards, most recently winning the Grammy for Best Pop Duo/Group […]

Little Mix’s Jade Thirlwall revealed on Wednesday that she ‘took one for the team’ while filming new music videos this year as teammates Leigh-Anne Pinnock and Perrie Edwards struggled due to their respective pregnancies. The singer, 28, appeared on Capital Breakfast as the hosts threw her a ‘party of attention’ as her co-stars stole the […]

ED Sheeran has been teasing new music for some time – and I can reveal that later this month he’ll be shooting an epic series of videos to go along with it. Edwho officially releases his sixth studio album next year, recorded at his home studio and plans to use the English countryside and seaside […]